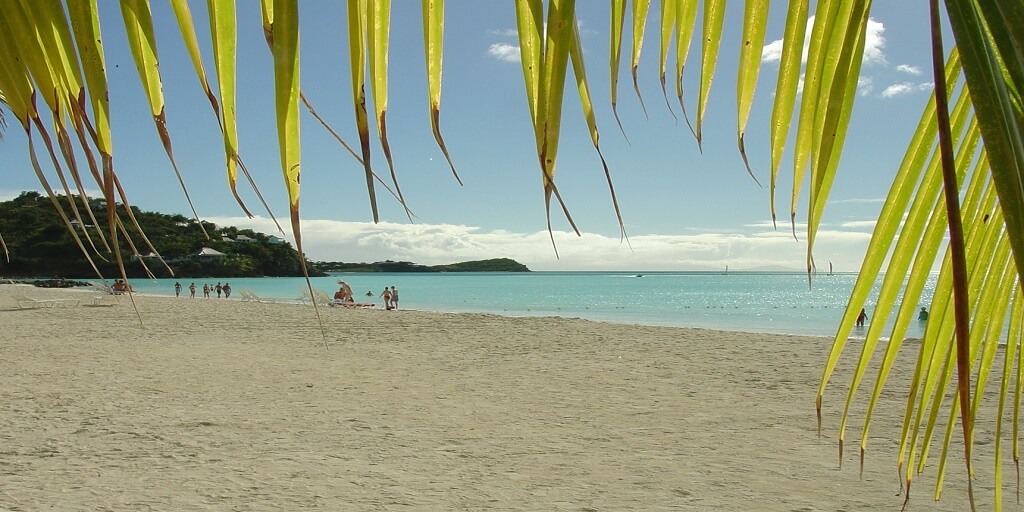 During the early years of our missionary life on the nine by twelve-mile island, Christmas time had its own unique traditions. No matter where you lived on the island of Antigua, you were never far from the ocean. When the holidays approached, our children always requested, “Half Moon Bay for Christmas Day.”

Antigua boasted 365 beaches, one for every day of the year. We never discovered all 365, but we did visit quite a few during our 38 years in that beautiful, tropical paradise. Half Moon Bay was the furthest from our home, about a 45-minute drive. Since gasoline was twice the price as in the U.S., we saved the destination for special occasions.

We made our first visit to Half Moon Bay in 1975. I had been told that wealthy philanthropist and racehorse owner and breeder Paul Mellon and his wife, Bunny, owned a 27-acre estate in the Mill Reef Club—a 1,500-acre members-only parcel of land that included five miles of shoreline. Paul Mellon was the only son of Andrew Mellon, who had served as treasury secretary to three U.S. presidents, and who was reported to be the richest man in the world at that time.

I must confess that I had no idea who the Mellons were, but a friend (and one of the Mellons’ seven cooks) invited us to tour their home, since the family was not in residence at the time. It was a lovely place, warm and relaxing. There was nothing ostentatious about it. I understood, when I learned later that Bunny Mellon frequently said in designing a comfortable home “nothing should be noticed.”

Former First Lady Jacqueline Kennedy and Bunny were very close friends. In fact, Bunny had designed the White House Rose Garden at Jackie’s request. As we toured the Mellon home, we saw the room where Mrs. Kennedy had stayed, and I snapped a photo of my son standing in the playhouse that had been built especially for young John-John Kennedy. Jacqueline Kennedy had taken her children to the Mellons’ home on the island after President John F. Kennedy was assassinated. The Mellons’ cook said that many famous people had visited the estate at one time or another—Armani, Eric Clapton, Oprah Winfrey, in addition to Queen Elizabeth and Prince Charles.

The Mellons’ main residence was located on a 4,000-acre estate in Virginia. They also had domiciles in Paris, New York, Washington, Nantucket, and Cape Cod. Following Bunny Mellon’s death at the age of 103, the Antigua estate was listed for $14,500,000.

We enjoyed the opportunity to see how the wealthy lived and to experience a little history at the Mellon home. More than that, we were reminded of one special Christmas when we, too, were wealthy but in a completely different way.

When we first came to Antigua, there were few places to shop for Christmas presents. There was no Target, no Walmart, and no shopping malls. We often received gift packages from friends that had been mailed from the States in September so they would reach us in time for Christmas. One year only a few days before Christmas I became concerned because no packages had arrived. Then on the day before Christmas we were notified that a box had arrived for us at the post office. There were no UPS nor FedEx services, and I went to the post office expecting a small package. To my surprise it was an enormous box filled with generous presents from our friends who worked for the Coca-Cola Company. They were the only gifts our family of six received that year. But within that box there were Coca-Cola beach towels, T-shirts, hats, Coca-Cola logo watches, and Christmas ornaments, including Santa drinking Coca-Cola. It was truly a Coca-Cola Christmas!

The law states that no one on Antigua owns the beachfront. All beaches up to the high-water mark are public. Half Moon Bay was one of the only beaches that consistently had waves where the boys could ride their bodyboards. Perhaps to rub it in to our friends who lived in places like Chicago, we loved to take pictures of us swimming at Half Moon Bay on Christmas Day. It was rather amazing to swim at the beach directly below the Mellon estate. We never again visited the home where Jacqueline Kennedy had retreated following the death of the President, but we usually swam there each Christmas, and as I swam, we could look up and see the Mellon home directly above the beach.

I vividly remember an amusing incident with the post office that may have been related to the absence of gifts that year. West Indians living abroad were known for showing generosity to their Antiguan relatives at Christmas—frequently mailing cash. Apparently, the local police had a key to the post office and had been making after hours visits there. I received a notice that the Postmaster General wished to speak with me. My friend Linda accompanied me to his office. I showed the desk clerk my notice and he informed the Postmaster General of my arrival.

The official came out and approached me, but rather than speaking in a normal voice, he whispered something I could not understand. He did not know that I have extreme hearing loss. I kept saying, “Excuse me what did you say?” but it didn’t help. He continued to whisper.

Louder than her usual soft Southern accent Linda said, “He wants to know if he can keep as evidence an envelope addressed to you that has been slit open.”

Immediately, I realized that he had been trying to avoid anyone else in the room overhearing that someone had tampered with the mail. Now, the entire post office clientele stared at us as I assured the Postmaster General that he could keep the envelope. After all, we had our generous Coca-Cola package full of Christmas presents secured.

No doubt we’ve received many Christmas gifts over the years that more closely resembled our needs and desires, but most of those gifts have long since been forgotten. However, we never forgot the precious and timely box that Coca-Cola sent us that Christmas. We did not need the $14 million home to feel rich and blessed. We all shared the same beach, we understood the true meaning of Christmas, and we had Coca-Cola paraphernalia in abundance—the ornaments returned to the U.S with us when we retired from the mission field and moved home to Southern California. The sweet memory of our Coca-Cola Christmas at Half Moon Bay still lingers in our hearts.

View all posts by Barb Waite →