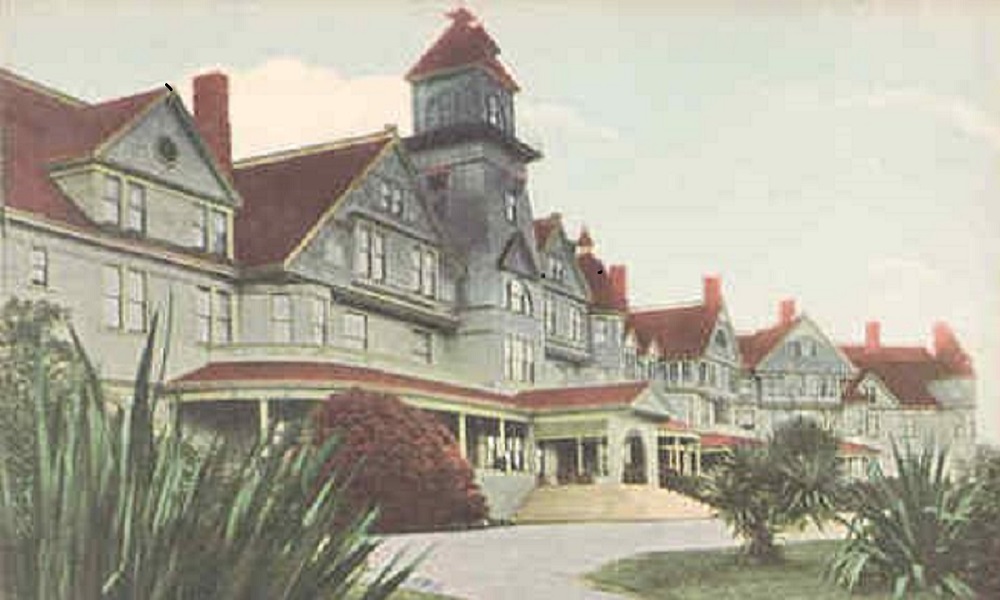 I have spent countless days (years?) researching the life story of Redondo Beach, California, where the Italian side of my mother’s family planted deep and long-lasting roots soon after the turn of the 20th century. I have an old chest full of postcards, books, newspapers, sheet music, and even an old bank deposit book. These treasures turned back time to the coastal city in its heyday. Some of my research enlightened me about Hotel Redondo, the center of activity in Redondo Beach in the early 1900s.

In 1889 the Redondo Hotel Company began construction on the Hotel Redondo, soon to become one of the most splendid edifices along Southern California’s south bay coast. Prominent people from all over the world visited the hotel. Along with beautiful amenities and scenic views of the Pacific, the Hotel Redondo boasted handsome tennis courts and one of the nicest golf courses in the state. People from Los Angeles thronged to Redondo Beach on weekends. Wealthy tourists came from the east by train, some spending all summer dining, dancing, and dipping their feet into the salt water. Those fortunate enough to reserve a room with a west-facing window awoke to panoramic views of the Pacific Ocean.

By 1909 tourists regularly flocked to the beach during its high season. Some 50,000 people filled Redondo Beach on Flag Day, 1914. No doubt the Hotel Redondo was filled to capacity.

Along with the crowds came the need for a well-planned city. Early Redondo developers, Ainsworth & Thompson took seriously the design of the young city’s streets. Roads running north to south were christened names such as Elena, Gertruda, and Juanita—after Spanish women. Roads running east to west received names such as Diamond, Emerald, and Beryl—chosen because of the popularity of nearby Moonstone Beach, where beachgoers collected gems and had them polished to a high sheen at local lapidary shops.

Today, the three-story Queen Anne style Hotel Redondo lives only on the pages of local history books and on vintage postcards. Beachfront homes grace the knoll where the edifice with its chimneys and turrets and dormers once ushered tourists through its lobby and up to its luxurious rooms. Its wide porch no longer sends patrons out for leisurely strolls along the strand.

While the hotel is gone, history has etched its marks throughout the city. When I visit 21st century Redondo Beach today, I drive down Elena Avenue, turn right on Beryl St. and continue to where it intersects with Gertruda. Up one hill and down the next, street signs remind me of history unassumingly planted throughout the city. Yes, certain things truly never do change.

Few people living in fast-paced Redondo Beach today have ever heard of the Hotel Redondo, but they have driven down Carnelian and Irena. Some live on Emerald. Others attend school on Diamond. My great aunt spent her entire adult life on Juanita. And I’m challenged to keep a watchful eye, because no matter where I go in this present life, I never know when I will come face-to-face with history staring back at me in the here and now.