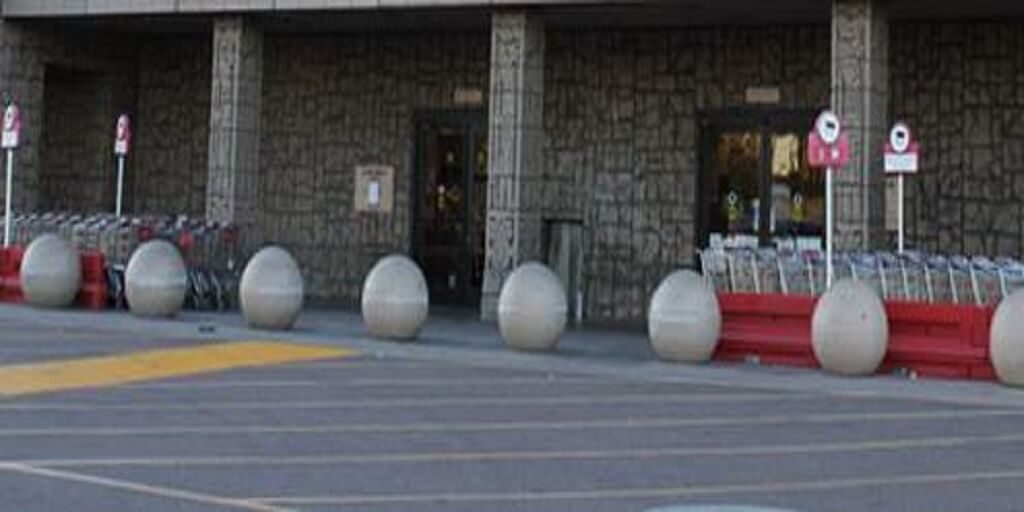 As I crossed the parking lot heading toward the rec center where I exercise most mornings, I had to step between metal posts placed strategically several yards from the large glass entry doors.  The task at hand—get inside before I change my mind about my workout and go pick up a fresh almond bear claw instead—is interrupted for a split second. Today, these barriers are everywhere, I tell myself. What a jolting reminder of the times we live.

Those barriers serve a dual purpose, but whether they’re placed there to control wayward drivers or to protect from vehicle ramming attacks, the posts convey a message—”Don’t you dare try to crash the doors of this building.”

Physical barriers of various types are the new normal because our personal security is ever at risk. And even when we’d rather not think about it, those pesky barriers stand as a grim reminder.

This gave me a blog idea. Do those posts in front of buildings have a name? I took care of the reason I was there—walk around and around a track that goes nowhere, and do it as many times as I can endure it, complete the day’s assignment in Treadmill 101, and push my feet up and down for 15 minutes on a recumbent bike. Then I promptly went home and typed metal posts in front of buildings into my search engine.

Whoa! They actually have a name. They’re called bollards. Bollards are solid posts made of wood or iron and because of being planted firmly in place—meaning they’re aren’t going anywhere soon—a type of them have been used for centuries to secure a ship’s mooring lines. If you have a nautical background you knew that already, and maybe even if you don’t. Today, they are becoming common as protective barriers.

I wondered. Do these protective barriers have to be poles? Can they be other shapes? Are the giant concrete balls that line the entry to a well-known electronic supply store here in my city called Bollard Balls? Well, I had to find out. And guess what? Those giant balls are indeed called bollards. I guess the premise is more about protection than size or shape so perhaps they come in other designs, too.

My imagination is spinning at this point. Were the fence posts around my dad’s cattle ranch with the wire strung from post to post called cattle bollards? They kept those critters from getting in or out depending upon which side they were already. I remember we had cattle gates—metal poles that lay in the ground to discourage cattle from going or coming at whim (AND without permission slips).

But now I’m way off track. Let’s get back to the bollards all over our city—far from any ship’s moorings. We didn’t worry so much about someone attacking a building rapidly and with malice a few decades ago. Times have certainly changed and the presence of bollards speaks a stern message.

Yet, as I felt myself becoming discouraged about the need for protection, I realized this wasn’t a new concept after all. There were castle moats. Not that I’ve ever visited a castle (Windsor Castle is on my bucket list). Those moats—deep wide ditches around so many castles and usually filled with water—weren’t there for decoration. They existed in order to stop someone bad from coming in without good intentions and without warning. And if we look throughout history, we’ll see all sorts of barriers that exist as a defense from impending danger.

I guess protective barriers aren’t as new as I first imagined. They may come and go depending upon the perceived safety of a given time and place, but they go as far back as Creation and God’s word itself.

God told his people to put up protective barriers—in this case against the unseen enemy—when he said in Ephesians chapter 6:13-17: “Wherefore take unto you the whole armour of God, that ye may be able to withstand in the evil day, and having done all, to stand. Stand therefore, having your loins girt about with truth, and having on the breastplate of righteousness; And your feet shod with the preparation of the gospel of peace; Above all, taking the shield of faith, wherewith ye shall be able to quench all the fiery darts of the wicked. And take the helmet of salvation, and the sword of the Spirit, which is the word of God ….”

I’m thinking about various bollards God has placed in my life and how at the time I wasn’t sure why they were there. I’d love to hear your thoughts on the concept of bollards and what shapes and sizes you’ve encountered them. Are you dealing with one now? And if so, might you think about it from a new perspective?